Maybe it's a memory of Nativity plays at primary school, all bound up with the excitement of Christmas. Maybe it's simply the visual magic of sparkly things in the vast blackness of night. Maybe it's the allegorical power of the Search: the quest for Truth; the single-minded focus on the distant and beyond-grasp. Perhaps it's having been born on the Winter Solstice (!). Anyway, I've always loved midwinter, which, to me, is a festival-of-light, sparkly-things-in-darkness metaphor for a sublime experiential truth: the all-and-nothing of existence; magnitude of import and insignificance at once; a bright light, tiny in the void. So I'm still working on this theme, which I began with 'Searching for Light'. There has to be three of them, I think. It is, after all, a magic number. This is a study for another 'wise man'. It's Richard Hayward, who is, as I've suggested before, a first-rate sculptor. Here's a link to some of his work. It's worth looking at. http://www.craftsguild.co.uk/sculpture/richard-hayward/
Posted by J M Williams at 06:52 2 comments: 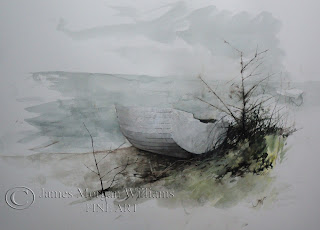 An old boat and the onset of rain. It's driven in from the sea by the wind. I love the rain. (There's a song there somewhere.)

As you can see, I've got my act together and made a myself a watermark in Photoshop too.
Posted by J M Williams at 10:39 No comments: 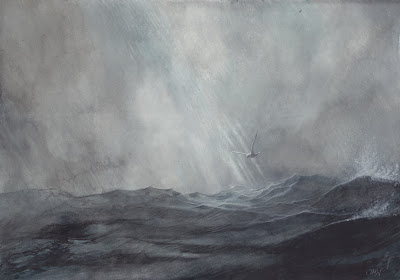 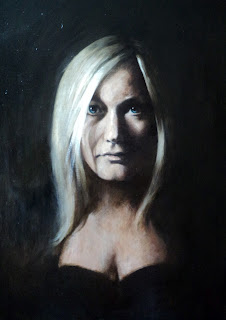 I'm working through a few ideas at the moment. Most have grown from the comet / asteroid motif that I was writing about earlier. I've also got some ideas that have grown more from the act of painting than from an intial narrative notion. Of course, they begin to take on narrative implications, as do we all...

Often, I think, to attempt to define an idea through language before it has found its own form is to inhibit it; to draw, as it were, a boundary around it. I don't like to say too mauch about an idea until it has become solid enough to exist alone, to be more powerful than attempts to define it.

So I'm not saying much about this one. It's a study towards something else. It's about emerging from darkness; as vague, for the present, as that.
Posted by J M Williams at 01:10 No comments: