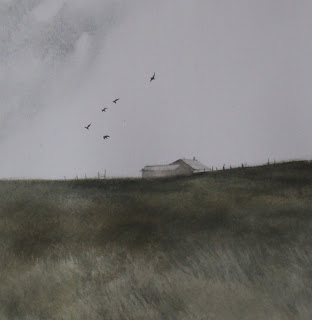 This is a farm atop the cliff down the road from me. I love the sense of perspective you get looking across fields - a real sense of depth. It's very like waves, I think, on the sea. 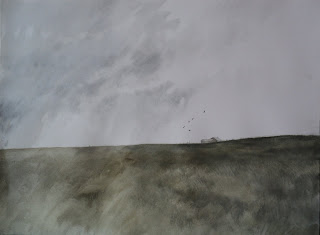 On Crow's Wings, watercolour﻿
Originally this started out as a landscape idea, but sitting drawing in the dunes I became fascinted by the crows. Then I knew what it was really about.
Posted by J M Williams at 07:43 4 comments:

A Collection of Dog Portraits

Over the past few months I've been commissioned to draw portraits of people's dogs. I thought I'd post a few on here. It's something I take seriously. For me, my work has to be a marriage of the physical and the spiritual (a deeply unfashionable notion in some circles on both counts): it is about recording the physical with accuracy and intelligence but also about recording more than that; a living being's response to another, I suppose, and the complexity of empathetic understanding that entails. I like to spend time to get to know my subject (whatever it is); a response that functions on a physical level only - merely 'looks like' - isn't enough.

I particularly enjoyed drawing Zac. He was an old dog and a lovely chap.


Esmerelda, graphite
Posted by J M Williams at 02:14 No comments: