The Prime Mover's in the details

It’s a bit like writing a play, it occurs to me, the stuff I’m doing at the moment. An idea for a character presents itself, semi-formed, and the act of drawing it into the light defines it. Herein lies both Art and craft. You push it back into the shadows; you draw it out again into the light.
And over time scenes form around it.
As in story, character and event are not separate. Character suggests event and event suggests character. They require one another and cannot exist alone. And they are defined by the subtlest and most complex of codes. When a work is successful, minute acts of precision (marks; words) comprise to make a whole that is at once their sum and bigger than it.
Art can be described satisfactorily through no external language, with no external lexicon. It is its own justification. Its truth exists within the mechanics of its telling.
For this reason Art towers like a giant above its critics who can barely see its feet.
Posted by J M Williams at 12:41 No comments:

Blind Woman Gazing at the Sky 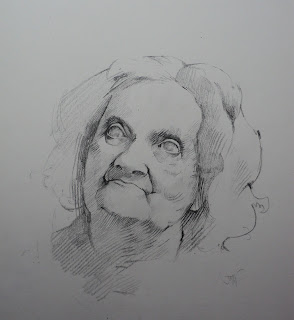 Another study for the 'comet' idea I've got. I tend to draw ideas as they come - usually ideas for faces, or at least ideas that are tied up with specific emotional resonances. It's a truly surreal process, I was thinking the other other day: I leave the sketches and studies around the studio and at some point it'll suddenly become obvious to me how these people should be cast; how they should be situated within a larger work. This usually happens in the quiet of the night. It is, as I've suggested before, a spiritual time.
Posted by J M Williams at 08:27 No comments:

Email ThisBlogThis!Share to TwitterShare to FacebookShare to Pinterest
Labels: Blind Woman Gazing at the Sky, Graphite

Beneath a Winter's Star

I've always been fascinated by lights in darkness. I've always loved the sparkliness of Christmas. It's a midwinter thing. The need for light in the depths of the dark. I'm knocking ideas about on the theme of a comet. ('Essaying', I like to call it. Visual Art should be driven by its own means. When it relies on words for meaning it is weak at best.) The starting point is the notion of a star in the darkness of the sky, growing brighter as it nears. We live beneath the hand of Fate always. Perhaps this star is a divine communication, the dawning of a new, better (and brighter) age. Perhaps it is a lump of rock from the deep, entirely careless of our fate, but destined for devastating impact. I'm thinking of the people grubbing about on the Earth below and the things they read into something so absolutely without their understanding. So here's another study for one of them (perhaps). 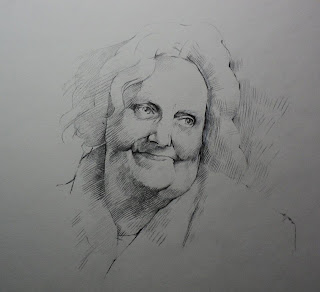 Study of an old woman,
Graphite
Posted by J M Williams at 07:11 No comments:

Lights in the Sky, study

For a while now I've been visually essaying on the notion of lights in the sky: man as an animal reacting to the unknown; fear and wonder; mystery and enlightenment; a message from God or a comet from the deep, deep darkness. 'Bill, enlightened', posted a while back, was one of these studies. With any luck, the ideas will develop into something fairly solid. I feel they're gathering momentum.

This one is a study on the same theme; my second wise man is Richard Hayward, a wise man in reality and a bloody good sculptor ( http://www.craftsguild.co.uk/sculpture/richard-hayward/ ).
Posted by J M Williams at 06:18 No comments: